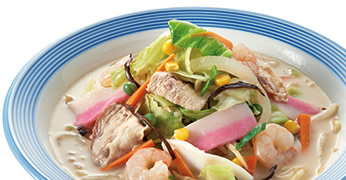 Nagasaki champon and sara-udon noodle dishes originated in Nagasaki. They are Nagasakiʼs soul food.
The toppings are pork, seafood and lashings of vegetables, for healthy eating with an outstanding nutritional balance. The luxuriously thick, al dente noodles intermingle with a light-flavored chicken and pork bone soup.
Champon is one of the most popular noodle dishes in Japan, and Ringer Hut aims for it to go on being a dish loved by many people as a day-to-day food.

In the age of Japanʼs closed-door policy, Nagasakiʼs Dejima Island was the countryʼs only port open to the outside world, and a unique culture grew up around it.
Champon were invented in the mid-Meiji period, after Japan had opened up. Itʼs said that a Chinese restaurant owner in the city came up with the dish as a cheap meal with high nutritional value that he could serve to the many impoverished Chinese students who used to visit Japan at that time. Subsequently it gained popularity among those students and became an established dish in Nagasaki.
There are all kinds of theories about champonʼs etymology. One is that it comes from the greeting “Shapon” or “Seppon” in Chinaʼs Fujian dialect, or from a word meaning “mix” in that dialect.

In Nagasaki, champon has become a food close to ordinary peopleʼs hearts, and the toppings for it are sometimes sold packed in bags, making the dish easy to cook at home. Ringer Hut has grown into a nationwide restaurant chain, so that today Nagasaki champon and sara-udon are loved by large numbers of people all over Japan. We hope that American people too will enjoy eating champon as a day-to-day food! With that fervent wish, we are working hard every day at developing this product.
Whereas champon is generally made with lard, which often gives it a heavy taste, Ringer Hutʼs Nagasaki champon is made with vegetable fat, for healthy and delicious noodles. Whatʼs more, the plentiful proportion of vegetables means lower calories!
These noodles are great for your health. 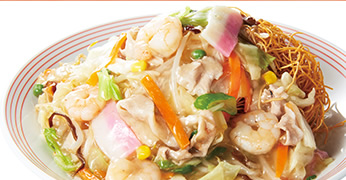